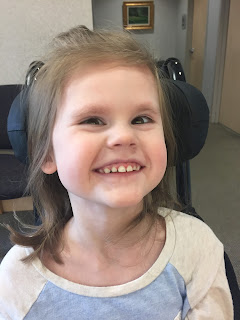 It's been awhile since I last updated on Carly's treatment with CBD so I wanted to catch everyone up on Carly's progress.

A few months back we found out that Carly's liver enzymes were elevated and there was a possibility if those enzymes were not within acceptable range she would have to come out of the study and cease taking CBD Oil. After receiving this news we started to do a little "momma bear" research about CBD and other Anti-Epileptic Drugs(AED) and possible interactions. After seeing posts and asking questions from many other families whose children were taking CBD it was discovered that a possible reason for elevated liver enzymes were because the CBD Oil was being given too close to her other AEDs. At the time Carly was taking CBD along with her other medication at the same time. After reading this new information we started giving Carly CBD Oil at least three hours before her other medication. It wasn't until a liver panel was completed did we find out her liver enzymes were back within normal range. We wholeheartedly believe the reason they went down were because the CBD Oil was given alone, without other medication. We informed the doctors at UAB who made note of this.

Since Carly was able to stay in the study she has been taking 1.7ml of CBD Oil twice daily. A few weeks ago we started noticing when Carly was laid flat on her back she would begin staring off into the distance and seem "out of it" for several seconds before coming back to normal. As with any indication of possible seizures we notified the doctors and set up an EEG.

During the EEG it was confirmed Carly has begun a new seizure type, Absence seizures. They are only triggered when she is laid flat on there back and we have not noticed them any other times. After meeting with Carly's primary Neurologist for him to read the EEG with us he informed us Carly's EEG looked a lot better than it did prior to CBD. He specifically pointed out that the background of her EEG was almost like a typical 5 year old child's however it was still slower. To us that is a huge win. I never will forget hearing the same Neurologist tell us Carly's background was very slow and abnormal so hearing this news was a blessing. Of course, she still has CDKL5 but a win is a win. Even though she has a new seizure type, it was agreed upon by her Neuro and us not to start another drug to fight those. Carly will stay taking only Topamax and CBD Oil to control seizures.

We still believe Carly has improved cognitively since being on CBD. Though she is not seizure free she has gone from 200-300 per day(visible myoclonic) to approximately 4-5 per day(visible).

I don't believe CBD Oil is a cure all or will work for everyone, but with the results we have seen thus far, it is hard to deny anyone the right to try it.