CBD Update - After the Rash 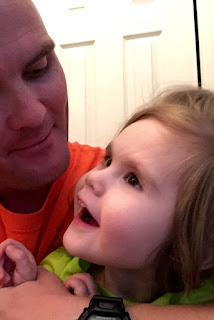 I wanted to give a post-rash update. There was no determination on what caused the rash. I believe it had to do with her strep throat. Carly had to go through two rounds of Antibiotics to shake the strep. It wasn't until the second round of antibiotics did it seem to start tapering off. Of course, it could have been some other skin condition too. A Dermatologist prescribed a topical ointment that we have been applying so maybe that had something to do with its disappearance.

Regardless of what caused the rash Carly has been steady. No major seizures since being on the CBD Oil and that continues to be the case. Her myoclonic jerks did seem to worsen when she was briefly taken off the oil, but since being back on they have they have subsided again.

Since we have decent control over her seizures, she is not on the highest dose nor do I believe she needs to be. There is no reason to keep upping the dose of CBD if we have control at a lower dose. A defining moment will come in a week or so when she has her first EEG since being on the CBD. We hope to see a change for the better in her EEG to show concrete evidence CBD is having a positive affect on her brain. Sure, the control of seizures is proof, but it would sure be nice to see a side-by-side comparison of the EEG's which we will see soon.

**Carly's results may not be typical.

God Strong
Posted by Dustin Chandler at 8:51 AM